Peebles of Princeton University in the United States received half of the 9 million kronor prize ($ 910,000), while Mayor and Queloz of the University of Geneva in Switzerland and Cambridge University in Great Britain shared the rest.

"This year's Nobel Prize winners have painted a picture of our universe that is much stranger and more wonderful than we could ever imagine," Ulf Danielsson, professor and member of the Nobel Committee on Physics, told reporters when the award was announced.

The Swedish Royal Academy of Sciences said that research by scientists "has transformed our ideas about the cosmos."

The mayor and his former doctoral student Queloz said it was "simply extraordinary" to receive a Nobel Prize for what they described as "the most exciting discovery of our entire career."

The pair announced the first discovery of a planet outside our own solar system, the so-called "exoplanet", in 1995.

"The study of exoplanets is perhaps the most vibrant field of astronomy," said Martin Rees, professor at Cambridge University and Royal Astronomer, in an e-mail comment.

“We now know that most stars are orbited by entourages of planets; there may be a billion planets in our galaxy that resemble the earth, ”Rees added.

Since its discovery, over 4,000 exoplanets have been found in the Milky Way, many of them nothing like our own world. In fact, the first planet they found, 51 Pegasi b, orbits a sun 50 light years away that warms its surface to over 1,000 degrees centigrade, the award-winning academy said.

With countless research going on for more exoplanets, this science may eventually "find an answer to the eternal question of whether there is another life out there," he said.

At a news conference in London, Queloz said the focus of research has now shifted from finding more planets to finding out more about them – about their atmosphere, chemistry and formation. Queloz also posed inevitable questions about the possibility of extraterrestrial life.

"I don't believe we are the only living entities in the universe," he said when asked if he believed "aliens" exist. "The chemistry that led to life is everywhere, so I firmly believe there must be life elsewhere."

Peebles thanked the Nobel committee for the prize, although he said his advice to young people wishing to enter science would not be attracted by the prospect of such awards.

“The awards and prizes, well, are charming and much appreciated, but… you must get into science because you're fascinated by it. That's what I did, "he told reporters over the phone after the award was announced.

Physics is the second Nobel to receive this week; William Kaelin, Gregg Semenza and Peter Ratcliffe shared the medicine award on Monday for discoveries about how cells respond to oxygen levels.

The Nobel Prizes were created in the legacy of Swedish dynamite inventor and entrepreneur Alfred Nobel and have been awarded since 1901. This year's Physics Prize will be followed by Chemistry Prizes on Wednesday, Literature on Thursday and the Peace Prize. on Friday.

Among Nobel laureates, physics often took center stage with winners, with some of the biggest names in the history of science such as Albert Einstein, Marie Curie and Niels Bohr, as well as inventors such as radio pioneer Guglielmo Marconi.

Using theoretical tools and calculations, Peebles was able to interpret the radiation traced from the universe's infancy and discover new physical processes, the Nobel Academy said.

He has shown that matter readily seen around us, whether stones, mountains or stars, actually represents only 5%, with the rest consisting of dark energy and dark matter. 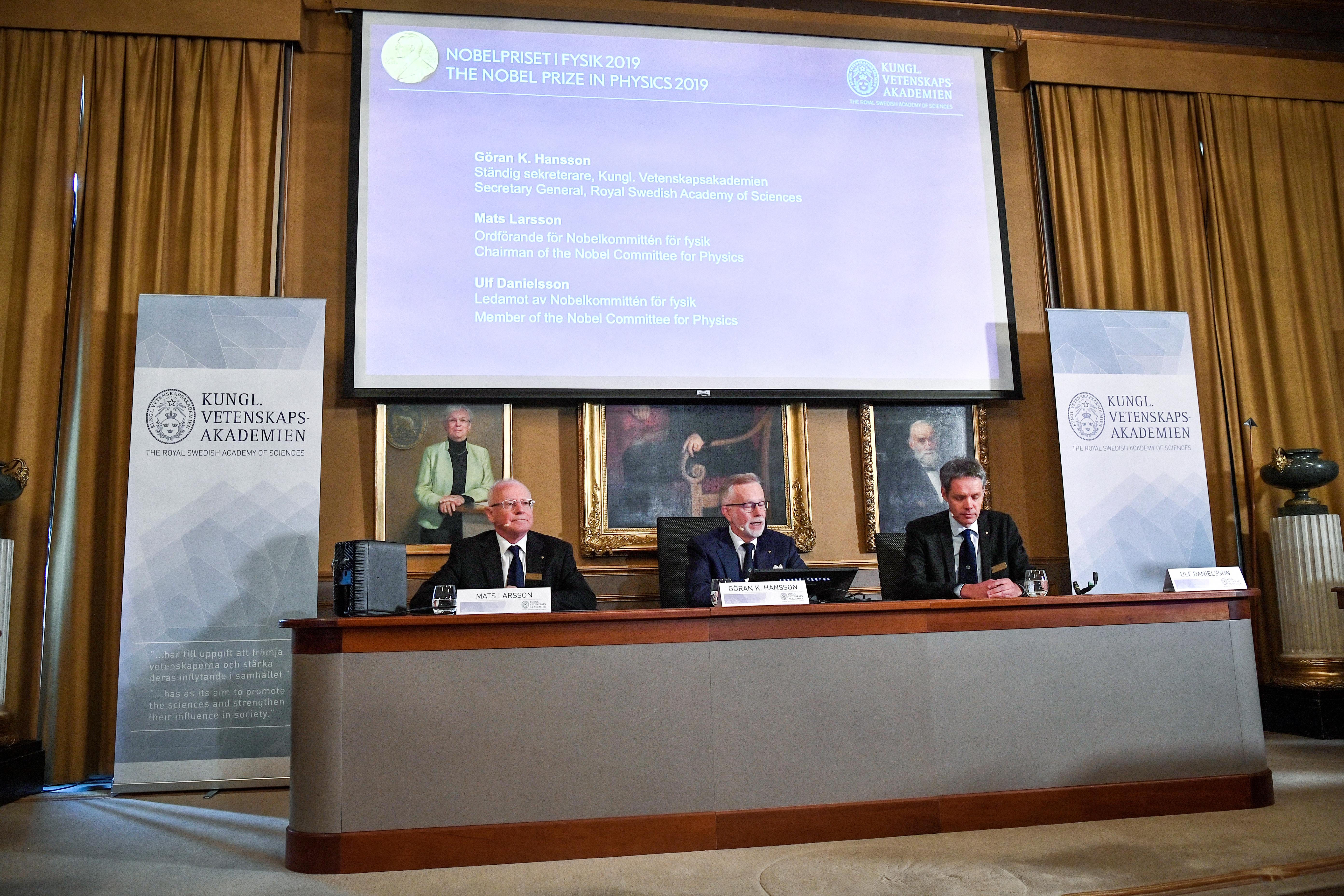 For a chart of Nobel laureates: